“Jero?” asked Ms. V. “Do you have anything you wish to share with us?” Her kind eyes twinkled at me. It didn’t matter how nice she was though, she was one of Them.
“No, Ms. V.,” I replied, trying to match her unhostile tone. “I don’t.”
“Are you sure?” she questioned. Man, when would this lady give up?
“Well,” I pretended to think hard, “I like to draw.” She brightened at this. “Really? That’s wonderful. Thank you for sharing that snippet of your life with us.” Then she moved on to the boy sitting next to me: a typical delinquent with purple hair and bad acne named Ronald.
I smirked inwardly. If I had known that something that simple would make Ms. V lay off, I would have tried it earlier. It was true, though. I did like to draw, but only when I was alone. Nothing annoyed me more than having someone peering over my shoulder and commenting on every line I made. No, it was better to draw alone.
“Okay!” Ms. V. said cheerfully, speaking to the circle of teenagers. “I think this was a successful meeting and I will be seeing you all again tomorrow. Let’s keep making progress!”
I sighed. Ms. V. said this every single day. ‘Keep making progress.’ I never did. Angrily, I strode to the door of the room and walked towards my bedroom. It was kind of depressing to be able to walk from a counselor’s room to your bedroom. It made you realize how messed up you really were. Maybe They wanted us to realize that.
Living in a rehabilitation center with a ton of psychos and psychologists could be difficult. You never knew how to act.
After running up a flight of stairs two at a time, I arrived at the polished front door of my dorm. ‘Jero Esquire’ read the shiny golden plaque on it. I snorted. It always struck me that the door to my room looked like the door to your typical college dorm. It was practically the opposite, because any kid who lived in this room would probably never set foot in college. Maybe the workers in the rehab center wanted us to make this connection. But you could never tell exactly what They wanted.
Opening the door, I walked into my room and flopped onto my bed. Then I quickly jumped off it and moved into the bathroom to brush my teeth. I was getting better at this strange, before bed ritual. After I had assured that my ivories were still sparkling in all their enamel glory, I kicked off my shoes and threw myself down on my bed.
Then I slipped a hand under my pillow and pulled out a worn black sketchbook and pencil. Seeing my sketchbook always made me happy, and I even chuckled as I flipped through the pages to the picture I was working on.
It was a picture of me, which was rare. I didn’t usually draw real people because it was too hard to capture the needed details. This was an exception, however. I had felt like I needed to draw this picture.
My spiky hair was shown on the flat expanse of paper, then my pointed chin and glaring eyes. The only thing needed to complete this portrait was to finish drawing the collar of my shirt and my mouth. As I drew the wrinkled collar, I hummed in amusement. If Ms V could see me now, her face would have split in half from a grin.
But she wasn’t here, and I would never show this side of me to others. I completed the collar of my shirt and stared at the picture. No matter how detailed it was, it could never depict my mental traits. My sharp and sarcastic sense of humor, my quick temper, my hate for pointless chatter. None of those appeared in the drawing.
I frowned down at the paper, deep in thought.


The next day, when it was my turn to share, I pulled out my tattered and worn out sketchbook. Looking up, I saw that Ms. V’s eyes were fixed on it and they burned with a strange emotion. Hope?
I opened the book reluctantly and paged to where my picture was. Then I held up the book to the class and tried not to take pride in their awed gasps and exclamations.
“Dude,” whispered Ronald, “way cool, Dude, way cool.”
I smirked at him. My smug smile matched the smile that adorned the face of my paper self.
“Jero,” said Ms. V. She smiled. “I’m glad you showed this to us. You’ve definitely made great progress!”
The smile stayed on my face. I’d made good progress. And I planned to keep making progress. But that didn’t mean I’d show them any more of my drawings.
I closed the sketchbook and turned to Ronald: “Your turn. I’m done.” As I glanced again at Ms. V’s smiling face, I noticed her name tag for the first time.
‘Ms. Anita Vicious’ was written on it.
Vicious? You’ve got to be kidding me. That lady was anything but vicious; she might be one of Them, but she was practically a saint! Just shows that people can surprise you when you least expect it. 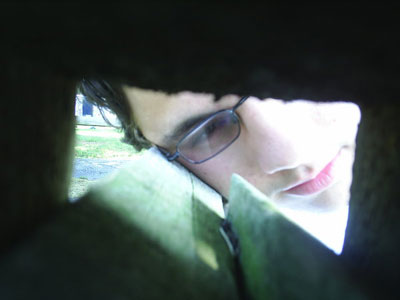