I had just sped down the grave yard road and was standing at the top of the high bank above the bridge when I heard a small voice yell over the unreasonably loud music pressed into my pre-maturely deafened ear drums. I’m Awake by Skillet. Instantly I tugged my ear buds free and look up to see my little neighbor girl, Kelly, barreling towards me, with her bike, on the other side of the bank. “Hello.” I smile mildly annoyed she caught me during a good song.

“Hey. Mom says I’m supposed to ride bikes with you.” She pants. “Which way we going?”

More pleased to have company than to go home I reply “I don’t know you pick.” After our traditional back and forth of ‘I don’t know what do you wanna do?’ I told her about the horses I saw from the ear bridge and we end up heading west to see them. Once we get our fill of the ‘pretty little ponies’ as I called them in all my strangeness, I tell her about the butterflies I saw in our elderly neighbor’s garden and since she is an eight year old girl she instantly lights up at the mere thought. So we ride back to my house for my old butterfly net that’s been used for everything but butterflies. Fish and kittens are the more likely, but not at the same time!

When we reached the other side of the street I spot the big yellow butterfly that to me at least has Kelly written on its wings. That’s for her. I say to myself. I let her have first go at the butterfly net but when she couldn’t reach over the fence I take the purple net and swiftly capture the yellow butterfly. As we gaze in awe at the little yellow and black, wildly fluttering, wonder, we both agree it resembles the butterflies she was catching on a video game called Animal Crossing Wild World. Reason number one the butterfly is hers. “We should go show Rose.” Kelly says all at once.

Rose. A sickly, elderly, woman with a reputation for being tough and speaking her mind— which isn’t always a good thing. I was especially nervous to go knocking on her door since we were standing so close her berry producing bushes the deer scares were making their quiet, high pitched, squeals. “Um…Are you sure that’s a good idea?”

Little Kelly assures me all is well and next thing I knew I was standing behind her in the enclosed porch that smells like ode-to-old-people but has that certain something that makes you, on some level enjoy it. Suddenly timid Kelly steps unto the concrete stair and bangs a small fist into the wooden frame of the screen door. We paused, listened, and when no answer came she knocked again. Kelly looked back at me when once again no answer came and in reply I shrugged. Bound and determined to share this beautiful bug with the woman whose garden it had come from she knocked on the door again. This time we got an answer. “Hello? Who’s there?”

When Kelly remains silent for a beat I call out “Kelly and nelehjr.”

“Who? Meh, come in!”
Almost cautiously Kelly and I slowly pad through the mud room and into the kitchen where Rose is sitting at her kitchen table in silky powder blue pajamas and a bathrobe. “Hello.” I said for Kelly and I both, smiling like the cupcake princess while my little friend displayed my true nature and acted shy. “We caught a butterfly and Kelly wanted to show it to you.” I nudged her forward.
“Make sure you have a tight grip on that thing. I don’t want it free in my house.” Rose said.
“Got it.” I replied.
“We caught this butterfly in your garden.” Kelly explained. “And we thought you might like to see it.”
Rose extinguished a cigarette, leaned in closer, and said “Ooh. Hmm…I know I’ve seen those before— yes, at the butterfly gardens in Washington by the river. Those gardens were so beautiful…Now those butterflies had a name…And they were rare…”
“Tiger butterfly?” I suggest.
“No. Not that…”
“Hmm. I thought it looked like the ones she was catching on a video game earlier.” I said laying my free hand on Kelly’s shoulder.
“Caught a whole bunch of those.” She said smiling.
Rose put her brain into over drive trying to remember the butterfly’s name. “Damnit!” she exclaims. “I just can’t get it!”
“That’s alright.” I answer. Honestly I was a little surprised Rose would use that sort of language around an eight year old, but I really shouldn’t judge, I’ve slipped up in front of her to many times to count!
Rose turned to her. “Kelly, can you have your mother come over and do something for me?” She paused. “Meh, never mind. I gotta go back to Denver.” She explained. “Something’s wrong with my throat this time…When I got the call I felt like balling. In fact I did sit on the bed and ball a little.” Rose is one of those women you can't picture crying, but when she does cry something is terribly wrong. “Damn doctors.” She mumbled. “I really hate them.” We nodded. “My belly looks like a road map!” She traced the places of her scares with her index finger through her shirt. “My belly button’s over her now!” She exclaimed pointing to her side. We both made a face.
Rose ran out of words and neither Kelly nor I knew just what to say, so I pursed my lips and nodded “I hear ya.” I said “Sometimes I have nightmares about doctors…My family and I will pray for you.”
She looked into my eyes, as vulnerable as a new born baby, and said “Thank you.” In that instant I realized the butterfly wasn’t for Kelly but for Rose.
We must have chatted for half an hour or more, shooting the breeze like good neighbors do, until we started trying to figure out what to do with said butterfly who was slowly running out of energy. I was beginning to think he might beat himself to death against the mesh trying to get away. “So Kelly,” I said “I dub this your butterfly. What should we do with it? Would you like to keep it in a jar or set it free? Like Rose said it’s rare so if we set it free it could breed more butterflies.” Rose nodded her agreement.
She thought about it for a minute then said “Mmh, set it free.”
Rose made us both promise to not kill it in the processes, and we both swore we wouldn’t, so we stepped out and released it next to the bushes were we caught it. Much like the video game the butterfly up and up until it was out of sight. Once again Kelly and I were free to catch more butterflies.
So here’s to the butterfly that brought three very different women together. Even the smallest of God’s creatures have a purpose. Who knew one little one little butterfly could inspire so much? One little black and yellow butterfly made me open my dream clouded eyes and see the people around me. Because I sit here and write [in a tree, at this moment in time]. One little butterfly made a difference. It brought joy to all who saw it, but most of all it made me pray for someone I’d normally have forgotten. I didn’t lie, I pray for Rose’s health every night, and I hope upon reading this you will too. 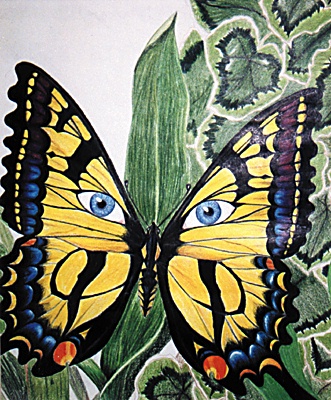 The author's comments:
Names were changed so anrey villagers won't chase me with pitchforks and torches.
Post a comment
Submit your own

View profile
I most certainly shall pray for Rose. It was a very touching story, nelehjr. BUT, I must admit that I'm not particularly fond of butterflies. They're beautiful and all but the thought of holding one in my hands makes me shudder. THEN AGAIN, I don't like any type of insect XD But I guess you've made me change my mind! (Except bees and wasps and hornets and those nasty, vile creatures). Good job!