You could say that I can’t even look at a middle-aged woman with an Alabaman accent, a weird haircut, and a dumb hat without thinking of a particular Pennsylvanian morning when a vacation turned into a survival story and a miracle turned into a melting pot of anger. One cold day in Pittsburgh, I was awoken in my roll-away bed to the pleasant sound of sirens and shouting, the morning birds of Steel City. I sat up in bed for a minute, shaking off the drowsiness before my 10-year-old metabolism realized ... Man, am I hungry!

After throwing on some clothes, I was out the door with my mother, who obediently began walking with me to the nearest McDonald’s.

“I’m going to get a bacon, egg and cheese bagel,” I told her triumphantly, “because it’s my favorite!”

Five minutes later I was running to the double doors of Mickey D’s, and tugging on the latches; I couldn’t wait for my stomach to be filled with fattening, greasy food. And then I saw the sign.

I couldn’t believe it! I was prepared to cry, throw a fit, or do whatever little kids did to get their way. I turned to my mom and gave her a look that said, “Today isn’t going to begin if it doesn’t hand me a pound of meaty fat for breakfast.”

“Come on, we’ll look for another one,” she told me calmly.

And so, starved to the point of insanity, I continued to trudge along the streets of Pittsburgh. We passed shops of all kinds, clothing, movie theaters, crafts and paint galleries, but no

McDonald’s! My steps grew heavier. The hunger in my gut was overwhelming. The world tortured me with every Wendy’s we passed. Suddenly this vacation had become a survival test.

This is America, I thought, so why can’t I find a Mickey D’s?!

After an eternity that actually lasted seven minutes, the world finally sent me a miracle. I looked up to find myself staring right into the eyes of a terrifying clown who sported a white face and ankle socks. I had never been so happy to see Ronald McDonald!

I raced inside to the counter where there were actually no lines! My laughing mother followed. I didn’t realize that I was about to look into the face of one of the most evil people the world had ever conceived. A short woman with a strange haircut and a black McDonald’s hat was evidently the only one working. She looked bored and tired. Still feeling optimistic, I asked, “Could I please have a bacon, egg, and cheese bagel?”

I was taken aback. Shocked, I glanced at the digital clock behind her.

“Um, your clock says 11:17,” I said, almost laughing at the absurdity of the situation.

“We ain’t got no breakfast,” she replied in the same monotone.

I looked behind her. There sat heat lamps with eggs, hash browns, and other breakfast items, half already packed in plastic containers. I couldn’t believe what was happening! Lunch was still 10 minutes away; she was just too lazy to reopen all the breakfast items. But I wasn’t ready to give up.

“But I can see the eggs and bacon behind you!” I pointed out, upset and starting to steam.

She finally turned and took a good look. When she looked back her face was beginning to show some fear.

Now she was fishing for excuses! I was ready to say anything that would get me the breakfast I had been dying for all morning. But the next thing I knew, I was being dragged out of the store by my mother.

So my survival story ended in defeat, I thought 15 minutes later as I munched unhappily on a Whopper. 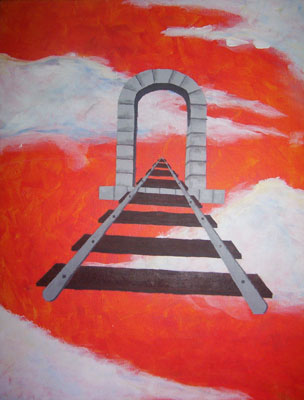