I sit frozen, squished between my parents in a cushiony booth. The restaurant doors swing open as my former soccer teammates parade around after their final game, cheered on by their parents. My eyes veer to my twin brother Dylan as he smiles and high-fives the other players, his victory lap ending in my parents’ embrace.

As everyone settles in for the ceremony, the coach reaches into a cardboard box occupying the entire table. As his hand escapes the box’s interior, a gold trophy as shiny as a newly polished car appears within his grasp. The scene was reminiscent of my childhood: my parents sign my brother and me up for a sports team; my teammates continuously remark how Dylan is so athletic while I am anything but; I quit the team. As Dylan’s trophy shelf gets crowded, I struggle to accept that he will always outshine me, that his trophy self will continue to grow while mine will remain empty.

While my friends and brother filled their time with athletics in middle school, I went home immediately after school and began aimlessly scrolling through Instagram. Each day felt routine: I tapped on the vibrant Instagram icon, little squares of strangers’ lives flooded my screen on the Explore page, and my eyes glued to music artists, cars, and exotic locations. One day, a pineapple post invaded my feed. Reading the caption, I realized the pineapple was an intricately decorated cake: hand-painted fondant formed the tough skin and carved yellow cake mimicked the delicious fruit. Intrigued, I clicked on the account and discovered lifelike cake creations of a shark head, colorful sushi, and a human heart.

I instantly thought back to afternoons at my grandma’s house. The aroma of our freshly baked cookies and brownies would flood the room, yet, in terms of appearance, they were, well, amateur work at best: cakes and brownies adorned with some sprinkles. Yet, suddenly, I had a window into the world of artisanal cake decorating. Afternoons from then on were spent deep-diving into YouTube videos about how to level cakes, fill a piping bag, and layer a cake. I was inspired.

Out came my dad’s mixer from the dark corner of the kitchen, its second time out of the shadows. Perched on the oversized island, it became a fixture in the kitchen. I first attempted a marshmallow cobweb cake for Halloween. When the chocolate frosting melted from the overheated marshmallows, I realized that I over-reached. Yet, each failure --red, white, and blue cake batter erupting from overfilled cake pans, buttercream curdling into a grimy goo instead of the necessary silky smooth texture for a drip cake, and fondant ripping at the seemingly razor-sharp corners of neon geometric cake -- taught me a lesson for my next baking endeavor.

My first successful cake (“success” defined as it didn’t fall apart) was a blue vanilla cake layered with yellow buttercream frosting, perfectly suited for my family’s Hanukkah party that night. In assembling the cake, I filled a piping bag with the yellow frosting, decorated the borders of the cake with a spiky pattern, and added a “Yay!” cake topper as a final touch. That night, everyone admired the cake and congratulated me, whipping out their phones to capture photos while simultaneously bombarding me with questions like a crowd begging a magician to reveal his tricks.

My next cake was always in my thoughts. When I got home from school, I excitedly sketched designs to create on the weekends. As my skills improved, I decided to document the process, setting up a camera nearby to film the baking and decorating process and later photograph the finished cake. I stayed up into the early morning hours carefully editing the cake videos, clip by clip, to portray the entire process. I spent hours on font designs and experimented with colors, backgrounds, and gradients. My cake videos amassed thousands of views, and my Instagram following grew. Soon, I had baked dozens of cakes—a watermelon with hand-painted rind, a four-foot-tall, five-tier sprinkle confetti cake, and a marbled fondant cake with a giant rock candy geode crevice.

Two years ago, on the first night of Hanukkah, my parents handed me a large wrapped box. Tearing into the beautiful paper and cardboard box, I found a matte black finish Kitchen-Aid mixer engraved with “No. 482 of 500.”

This was the trophy I was waiting for. It sits proudly on a shelf above my desk—my trophy shelf. 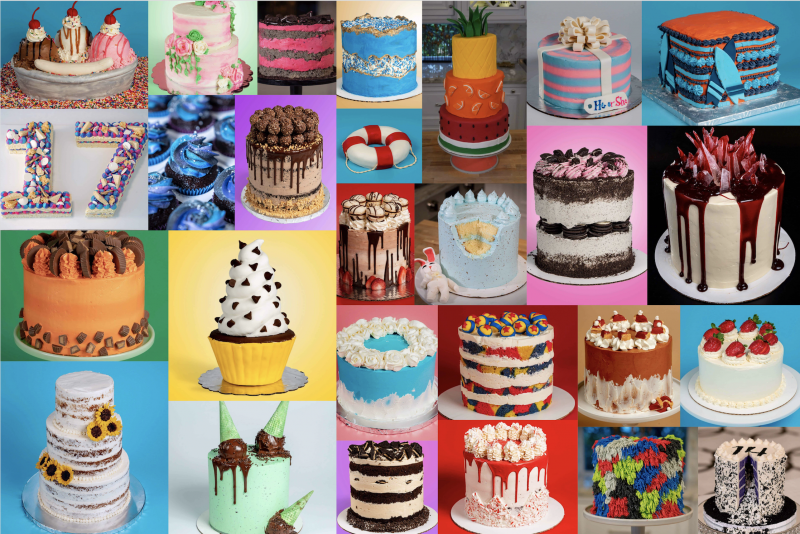