Well,” I sighed, as my mother frantically ran around the store. “I’ll be off then…” I mumbled, trying to shake my mother and her needs to buy everything and anything under $5. Shuttering, I had to admit it was a pretty weird day. Black Fridays usually are. This one, although last year’s fight over a toothbrush was pretty epic, made last year’s look like a walk in the park.

Trekking off into the games section, hoping to get in on an hour or so of Left for Dead on the X box 360 on display, I came to an aisle full of kids. All surrounding the X Box 360. Sighing once more, I headed over to the book section. It was pretty picked over, resembling more of a skeleton of shelves than a well-organized library. That basically doomed me to boredom, unless I could find a new pair of sneakers… looking down at the worn out ones on my feet, thinking new ones would do me some good.

Passing the aisle of toys, which were full of screaming and “MINE!”s, I shuffled past, then over by the appliances..Lame… only another section of furniture to go to and I’d be home free…

Turning my head, I seen a Kmart official screaming at a reclining chair…. Looking closer, it was a girl. Sitting in the reclining chair, reading some blue book that said ‘Go Ask Alice’.

She was pretty, with light blonde hair cut like the ‘emo’ kids at my school, with the exception of black tips. She had on a black sequined tank top and black ripped skinny jeans, a huge beaded necklace with fake black flowers around her neck, and a pair of leather flats on. Rings littered her fingers and jelly bracelets on her wrists, with dark eye makeup.

“No,” She said, not looking up from the book.

“I will be forced to call in the police if you don’t come down.”

“I will,” The woman threatened.

“Go for it.” She said, bookmarking her page with a display rose. She shifted her weight and crossed her legs, intrigued by the woman.

“Oh believe me, child, I will call your mother and she will be angry with you,” She said, her face turning a bright red.

“Marceline,” Someone smiled quietly, their cart barely full, all of stuff that would probably be used. It was the exact opposite of my mother’s cart.

“Make me,” She said, an arrogant smirk on her face knowing she had the upper hand in this battle, her face not moving from the attendant lady.

“Is this your daughter, ma’am?” The attendant asked a hand on her hip.

“Yes, now she’s not causing any damage, so leave her be.” The mother said with a smile on her worn-out face. There was no resemblance between the mother and daughter. The mother had tanned skin, with brownish black hair while the daughter’s pale and light blonde.

The girl stood up. “Am I not allowed to have my share of fun?” Smiling, the girl held her arms out as if the wind was blowing her hair. “I feel great up here. I feel tall,” She said. She was sorta short…

“I’m king of the Kmarts!” She called out at the top of her lungs.

The lady rubbed her temples, her tall, reformed look broken by the trouble on her face. I started to back away, those new shoes calling my name…

I pivoted over as the girl returned to her place and cracked the book open. “What?”

“Get her down.” The lady said, not looking up.

“Why me?” I asked, not wanting to be in the middle of this.

“JUST DO IT!” She yelled, and then composed herself. “Here…a hundred dollars out of my own pocket. I don’t want to fill out report papers today.” She said, shaking her head as she walked away.

I climbed up, facing the girl. It didn’t take her long to notice me, “Oh. Hey.”

“Hi,” I said, a bit embarrassed. She was really pretty up close, too.

“Pull up a chair- you act as if you’ve never been to Kmart.” She said, gesturing to the leather desk chair beside her.

“You act as if this is normal,” I joked, sitting down uncomfortably.

“It is,” She said, exaggeratedly, “for me.” She started giggling, “I’m Marceline. But I’m guessing you’ve already heard.”

“Caleb.” I said, extending my hand towards her. Happily, she accepted it.

“Cute name.” She said, shaking my hand lightly. She had a firm grip.

Marceline smiled. “Yours too,” I said, leaning back a bit. She wasn’t nearly as crazy as I’d seen her just a moment ago.

“Why are you up here, anyway?” I asked, she put her feet up on the display coffee table.

“I’m actually up here because I was told to get you down. By that lady.” He said, twiddling a plastic rose in my hands.

“Yes, but that’s not the only reason, is it?” She tempted, trying to break me.

“Your mother’s the same as mine, isn’t she? Oh, isn’t this just darling, Marceline, what do you think? Yackity-yak, blah-ditty-friggin-blah,” She said, flailing her arms everywhere. With a crazed smile on her face.

“No, your mother has some restraint. Mine has almost two carts full.” I admitted, “What are you doing today?” I blurted, unable to control the words babbling out of my mouth.

“I’m going to a concert tonight and my girlfriend canceled…” he trailed off. Of course, he wasn’t really mad at Alison for blowing him off, she had ‘other plans’ like getting a ‘mani-petti’ whatever that was.

“You’re a fan?” She scoffed a disgusted look on her face.

“Yup.” I lied; it was a band of Alison’s. I’d never even heard of it before she scored the tickets.

“We could sell the tickets and skip to an MMA fight.” She offered.

“Really?” I asked, genuinely surprised. A girl, going to an MMA fight…

“Connections?” I asked. When did a girl have connections to people who could trade their Paramore tickets for MMA ones?

“Also known as scalpers outside of the Staples Center,” she smiled, “You in? Or you still wanna see Paramore?”

“I’d rather watch guys knock each other out,” I smiled, “If that’s alright with you.”

She came down, some people cheered for us, and she took my hand, smiling brightly. I squeezed hers, giving off a smile to match. We walked out of the store, took a taxi to Dairy queen, went to the concert and overall had a great time. I dropped her off at her house, still in the taxi, when she kissed me on the cheek goodnight.

Now that I think about it, I never looked back when I walked out of Kmart. Everyone’s eyes staring us down. And I never did find a new pair of sneakers. 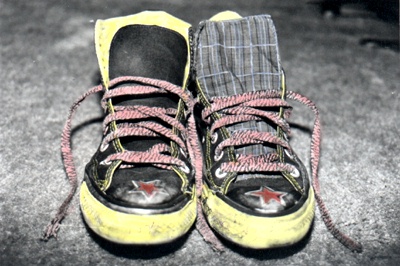 The author's comments:
Yes, this really happened. The girl in the chair is me, and this happened on Black Frieday of '08. We talk all the time and he became my best friend and (Funny how this works) my neighboor. But from his point of view. ^^" Enjoy, rate and leave a comment!
Post a comment
Submit your own

Favorite Quote:
Life is not measured by the number of breaths you take... but by the moments that take your breath away.