Ask anybody, and they'll tell you that I'm an avid video game player. I love to play games, and over the years I've played many, across consoles such as PS2, Wii, and, currently, Xbox 360. Yes, I've played many, many games, but the one I'll always remember as one of the best I've ever played is EA's and People Can Fly's Bulletstorm. Coming from the creators of Gears of War, it was no surprise that this game would be a blast. I bought it a week after release and played it almost non-stop afterwards.

Bulletstorm takes place in the future, when space travel has become a reality and new planets have been discovered, kind of like Star Trek. The game's protagonist, an alcohol-loving fugitive named Grayson Hunt, has been leading his team of soldiers throughout space for years in a mission to take their revenge upon the corrupt military general Sarrano, who tricked Hunt and his friends into killing innocent people. The thing is, Hunt and his team are also being hunted for their crimes.

Soon, Hunt find Sarrano's spaceship and begins unleashing hell upon it in a playable rail-shooting sequence that you never get tired of. This short battle leads to both ships crash-landing on a planet that used to be a vacation hot-spot for travelers, but is now overrun by savage bandits and gruesome mutants, which serve as the game's enemies and bullet-sponges. Bulletstorm's main gimmick is the Skillshot. The game dares you to try and murder your enemies in the most creative ways possible, either by kicking them into mutated cacti or by using your electric leash to rip the heads off of gigantic minigun-wielding baddies. A story-based first-person shooter, this is not the game for those who want an RPG experience.

The weapons are devastating, the blood is gushing, the limbs are flying, and the fun is everywhere. All in all, one of the most perfet and entertaining games I have ever played. 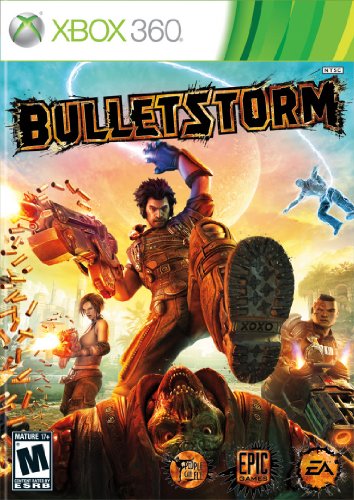 View profile
This truly is one of the most memorable and creative games I've ever played! Great review on an amazing game!